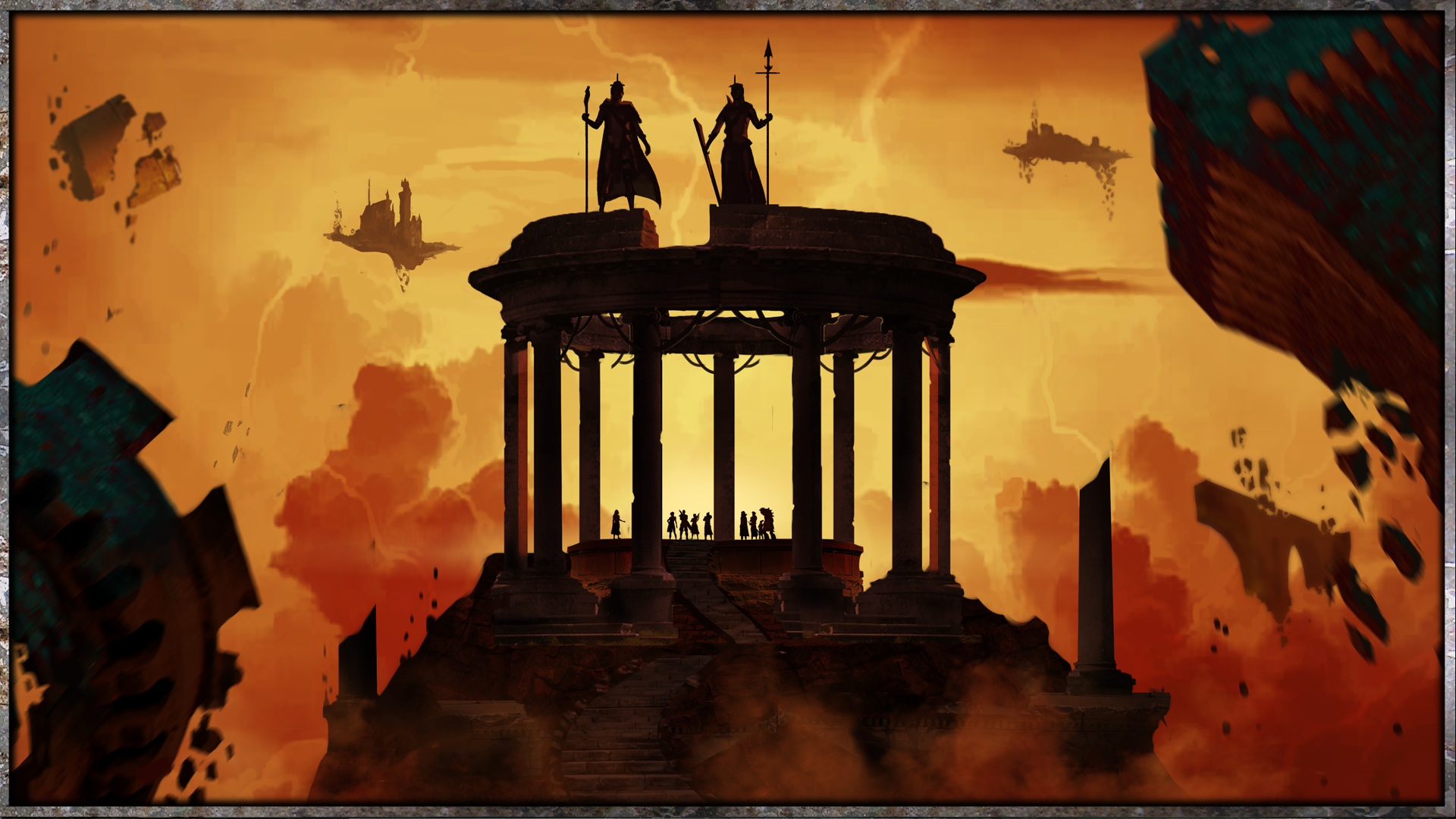 Ayla Swanlake, the last Interventor, walked with a confident stride, her every step echoing off the marble steps.
The staircase wound its way up to the Heroes’ Pavilion: a gigantic structure floating in the middle of a red sky, surrounded by ethereal, incomplete fragments of Endarth’s past and future places and times.

As Ayla climbed the steps, she thought to herself that, after so long, at last, magic was her companion, all-encompassing and complete, unconstrained by the limitations of mana or aether. She felt it flowing through her whole being, reassuring her step by step.

Still, everything had a price and she was locked here, inside another layer of the Interstices, where things didn’t feel real either. Even the Heroes’ Pavilion was a mirage of a place destroyed centuries ago. And, though she tried to ignore it, Ayla listened to the sounds, at the edge of her hearing, that might as well be wailing or screaming; which, to her chagrin, were the only thing that seemed real to her.

She faced the last flight of steps. Inwardly, she knew she was not the same one who had fallen on Endarth a century ago. Nor was she the Interventor who had given her life to be imprisoned in the Interstice and retrieve the souls of the chosen ones. It was all being left behind, even the memories of her battles with the banshees and her calls to Endarth, which now seemed distant and unreal.

She reached the Pavilion, where twelve gigantic columns ended in capitals that seemed alive, full of roots that gripped the immense circular architrave, on which rested a frieze that narrated the great moments of a thousand souls and the tragedies of a million lives. As an imposing finale, there reigned the statues of Dramo and Diocono, the First Born among the Interventors, those whose blood was touched by shamash magic, the Guardians of Humanity, the Great Heroes.

Ayla was surprised by the absolute silence, which caused pressure in her ears. She thought of taking another step forward, of her boot clattering against the stone floor to break the moment. But she was frozen, overwhelmed by the place, by the surroundings.

He breathed in slowly and the paralysis passed. He opened his arms.

Her words tore through the air leaving small wisps of mist, though Ayla did not feel cold. She closed her eyes and continued muttering sentences from the spell, causing magical symbols to form in the air around her, only to vanish moments later.

Powerful spells had a lot to do with the summoner’s magical control and supply of mana or aether. But in this place, not everything worked the same way. To her despair, everything became a bloody challenge, no matter what she did. However, she was also used to overcoming the difficulties that had come her way, not for nothing had she spent an eternity locked in her hut, where she had learned to tame the mystical energies. She was sure, she would finish what she had started by hook or by crook, she didn’t care in the slightest.

The elements flowed around him, violent gusts of fire, wind, water, and earth, lashing like whips, out of control. At her feet lay the bottomless pit of Death’s eternal oblivion, and above her head floated the dazzling halo of Life. Ayla reached out and opened her hand. With a hiss, the Soul Gems materialised before her, seven in all: the skilful huntress, the exiled warrior, the relentless assassin, the powerful wizard, the uncompromising soldier, the fanatical inquisitor, and, finally, the curious duo of dwarf and ook.

Suddenly Ayla felt something else writhe inside her, and her consciousness was pulled with irresistible force to another place, where the darkness was impenetrable and the cold was real. So much so that it made her shiver instantly.

The Interventor activated all her magical defences by instinct. She felt the ground freeze beneath her feet, and the sensations seemed strange and contradictory… until she felt that she was back on Endarth.

“You’re in my domain, girl,» said a male voice in a calm tone.

Ayla felt a chill, and it wasn’t because of the temperature. She knew the speaker.

“Where is my Master?” Ayla demanded.

The Interventor narrowed her eyes. The darkness around her was total, but she was beginning to glimpse two shadows.

“Is it really you, Master? To hear your voice again…”

“Enough, Ayla Swanlake,» the male voice said. “I know your intentions, your desires, your wishes. And none of them will be fulfilled.”

“You will not return to Endarth, General. I will not allow it.”

The sound of laughter made Ayla shudder. Something was wrong. It didn’t sound unbalanced to her, but there was an echo, something that made her think of a skull where bones clattered against each other. But that wasn’t possible, not even for him.

“Look at me, I am in Endarth! Though I am not free, I grant you that,» continued the voice of the one Ayla had named as ‘General’. “However, your sacrifice cannot be repeated, remember? The thousands of lives sacrificed for a single spell? Can you imagine a greater betrayal? I have thought long and hard about it, about your decisions, about your scale of values… and it has been revealing. I can safely say that after all this time, I finally know you. I have seen inside you, as clear as the skies of Edannan that you no longer let me gaze upon. And here, in my prison, I know what you long for… and you can do nothing. For the situation is different – absolutely everything is! But you know, of course you do. You know, deep inside you, that you cannot stop the invaders with an army of seven warriors…”

“Eight,» Ayla corrected him without thinking.

The silence became tangible. Until it was broken again by laughter, though this time it sounded genuinely amused.

“Eight warriors! Eight mighty warriors to stop the invasion of Uz Rakkier, the Warlord of the Khela, the so-called «Eternal Goddess»! And what is your objective? To close the Gates. But the more you close, the more intense will be the flow of enemies through the remaining ones. Each Gate will cost a little more than the previous one. Each step will deprive you more and more of your only resource, and, in turn, will strengthen me and hasten my return to Endarth. Your mission is impossible; don’t you see?”

Ayla felt anger rising inside her. Hold on to it, she thought. Use it once and for all. Face it here and now, in the fullness of your powers. Why the charade of souls? What bloody difference will the effect of eight revenants make against the immense danger that looms over Endarth? I don’t have to wait. I don’t want to wait. If it’s all down to one card, why not now?

Ayla’s hand shot up as if propelled by a spring. Magic roared as it gathered and made it glow. Darkness itself recoiled before the power of the Interventor. That was it. That was it! Get the hell out!

“No, Ayla. My orders were absolute. Your faith in me is the only thing that will save us.”

Her Master’s voice was like a slap in the face. The magic dissipated and Ayla lowered her arm. Her body trembled, her ears were ringing and she could only hear her own heartbeat. But her Master was right, as always. She couldn’t let herself be dragged down, couldn’t sacrifice the whole plan for a fit of rage. She believed blindly in her Master, and her Master believed in her. She would not fail. Not now.

“Alright, Interventors! It would have been dull to end this now. So, while the time comes until I am released from this frozen land, I accept your entertainment: make me part of your slow agony, let me accompany you as you slowly lose hope, include me in your covens when you want to consume and betray again those who will believe in you. And please talk with me about your decisions, about the morality of your actions. For from now on we will be together… until the end,» the General concluded, and snapped his fingers.

Ayla fell to her knees on the floor. She was back in the Pavilion, but her body was exhausted. Her mouth tasted of blood and her muscles ached. She sat up with an effort and stared at the Gems, floating before her.

She pinched the bridge of her nose and remained in that position. A whirlwind of emotions swept through her, making her tremble. It was several minutes before she felt willing again. Then she sat up and raised her arms resolutely.

“Look well upon me, and see that your words do not dent my will! Observe, from your prison to the north, the first step to your destruction! For I, Ayla Swanlake, have bent the laws of life and death to return these chosen ones to Endarth. I alone am responsible, and upon me will fall the punishments for trespassing the prohibitions of our Order.”

The magic spread throughout the Pavilion, biting into the marble, up the columns until it crackled over the weapons of the statues of the Great Heroes. The energy was fierce, for this was what Ayla had been preparing for so long.

She smiled. She took a breath. And shouted her last sentence.

“And, as Interventor, I command you: return to Endarth!”

End of part one.