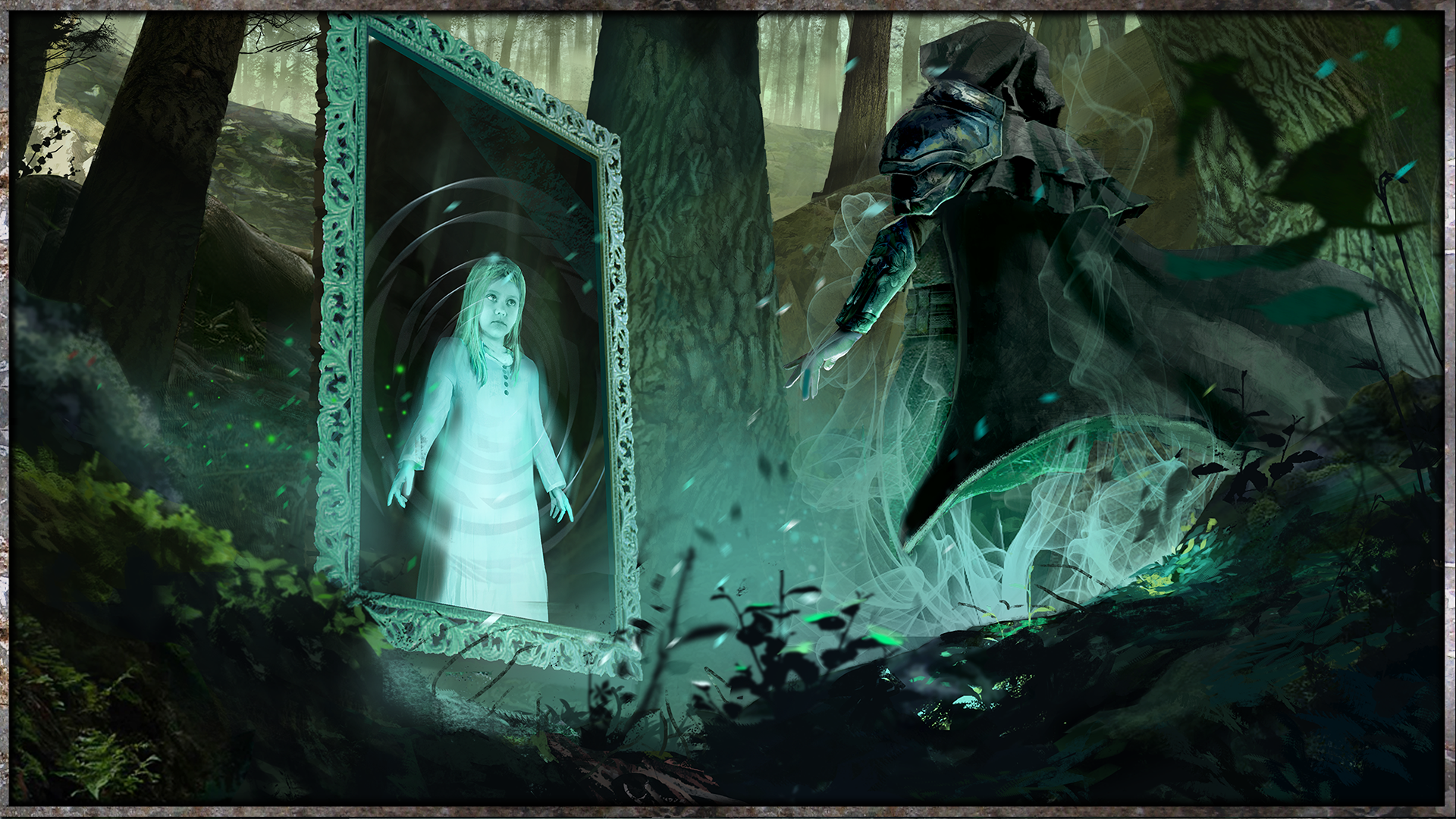 Holding a candle in her hand, Ayla walked down the narrow corridor of the log cabin. The little flame flickered, making the shadows dance. She stopped in front of a small white wooden door and took a deep breath. Some things she ignored: the drops of blood on the floor that were still fresh, the scratches on the wall she’d made as she’d fled from her attackers, her footprints muddy from the forest nearby. Her gaze fell to the door handle. It gleamed softly, challenging her. Why did she keep coming back to the same place, over and over again, never quite being able to bring herself to open the door? Was it really so important to find out what was inside that little room, that tiny pantry? She knew it wasn’t. Nothing she saw would alter her mission in the slightest. And even so, although her hand moved towards the handle, it stopped when it was halfway there. The silence wrapped itself around her, damp and heavy, pressing down on her chest while the dull light of that never-ending day filtered into the room through the mean little window and under the door…

Ayla jumped back, stifling a scream. She couldn’t do it. She was breathing hard, her heart pounded in her temples. It didn’t matter how much time had passed; it didn’t matter that her sacrifice had been necessary to save Endarth. She couldn’t bear it any longer; it was that simple. And there was nothing in her prison, in that tiny log cabin at the edge of the forest, that she could grasp a hold of to stop herself from going mad. She’d always been so methodical, so thoughtful, but the harrowing pursuit she’d endured had forced her to take the riskiest step of her life – the ritual – out of sheer desperation.

“How much longer before the seal breaks?” whispered a voice from behind her, by her ear.

“How long have you been here for, trapped in this moment in time?” It was the voice of an old woman, coming from knee height.

“Are you sure you followed all the right steps?” Another voice echoed.

“Time is running out, child…”

“How will you escape from here? Maybe it’s all started already, and the Second Apoc…”

Ayla closed her eyes, gritting her teeth. She concentrated hard. And little by little, the voices inside her head quietened. They’d come into being as a whisper that with the passage of time had become a wild shouting. She smiled sadly, determined. Ayla wouldn’t accept defeat. It had taken time and discipline to tame them, but she’d succeeded in the end.

Once she was absolutely sure that all she could hear was the usual silence, heavy and suffocating, she opened her eyes. She turned from the door and walked into the little sitting room where a fire was crackling, although it was decades since she’d put any logs in the grate. She passed shelves packed with hundreds of magic books, some of them enormously powerful, but dusty too. During the early years, all that grime had irritated her, as had the fact that three of them weren’t in correct alphabetical order. But it didn’t matter how long she spent cleaning and organising things, after a while, everything was back exactly as it had been before. That was the curse and Endarth’s only hope: that she would be captive at the precise moment the sacrifice was made, in that humble log cabin, one of the last refuges of her Order.

Absently, she ran her fingers along the rows of leather spines. She’d read every single one of them so many times, drawing on their knowledge and power, preparing herself as well as she could. Had it all been in vain? Probably. The wager made by her mentor came first, above all others. Had such a sacrifice really been necessary? Thousands of souls sacrificed to forge a seal, thousands of souls torn away from their loyal bearers, all betrayed by one being; her own mentor, one of the few survivors with divine blood in her veins. And, of course, she herself, locked into a nightmare without end and on the brink of madness. The price had been so very high. And it was a fair one. The Great War wasn’t the Apocalypse, the one that ripped Endarth apart. That was merely a shadow. The Great War, the conflict that threatened to consume everything and that was the result of too many vested interests, too many betrayals, too many deaths, was still to come.

And she was the only one left to stop it. She had a sudden, intense feeling of vertigo.

Seeking comfort, her feet led her to the marble altar at the back of the room. This was where the only objects that had escaped the curse sat, outside the prison, within the flow of time: the great golden hourglass and the soul gems, oddly matched and inert, lying there in a jumble. Ayla spent a lot of time there, holding fast to her sanity as she listened to the faint hiss of the sand turning present into past, falling in a trickle as thin as a hair. Given the size of the clock, it should have emptied in an hour, but it hadn’t. When Ayla had woken up after the sacrifice, the top bulb had been full, although the sand was already flowing, as if someone had just set it. And somehow, it had continued, at a rhythm all of its own, unrelated to any time known. At that moment, the upper bulb was almost empty. Was she forgetting something and running out of time? Or should she prepare herself for when the very last grain of sand fell? She didn’t know, and there was nobody there who could tell her. Yet again, and not for the last time, she reached out and tried to touch it. But as with the soul gems, her hands passed through it as if it were smoke, blurring the image for a few seconds.

As long as I still have an ounce of breath left in my body, I will protect you all. I will halt the darkest of powers and avert the greatest of disasters. But no Master can escape the hands of Time, Ayla, my dear. My time will come, sooner or later… We must be ready.

She walked towards the dirty window and looked out over the fields, outlines blurred by the perennial mist that coloured everything grey, like ash. Ayla recalled sensations from before the sacrifice. She remembered the merciless metal against her wrists, warm blood, and the ice in her heart. But she didn’t remember what time of the day it was, although she was grateful that it hadn’t been at the dead of night.

Outside, everything was quiet. Was this how it should be?

The hairs on the back of her neck stood up, and the candle flame flickered once more and went out. The darkness wrapped itself around her, but Ayla noticed a change; something was creaking and unwinding as the light of a new day burst through. Surprised, she started walking with no idea of where she was going, watching how the old wooden walls transformed into tall trees, the rotting floor became the forest canopy and the gloom of the ceiling opened out to reveal the longed-for blue of the sky. As the world blossomed around her, she was suddenly seized by uncertainty. Sensations almost forgotten gently enfolded her: the warmth on her skin, the smell of clean, fresh air, the rustle of the leaves. The prison that she would never leave as long as she lived was still there, but she allowed herself the luxury of closing her eyes and savouring the moment. Almost immediately, she was assailed by guilt, the spell broken. She swore under her breath. Looking up, she took a firm step forward and began to walk into the forest that lay before her.

When the moment arrives, you’ll know. There’s no-one but you who can carry this burden. And there’s no-one who could do it better than you either. You’ve always been the most able and the one it pains me most to entrust this task.

“But where to, mentor? Which direction must I take?”

A vicious gust of wind shook the forest, leaving a swirl of leaves and broken branches in its wake. It struck her fiercely in the chest, bringing with it the scent of earth and rain. Ayla felt the touch of reality after such a very long time. And then she heard a voice, a voice from that distant past, a voice that she’d missed. Coming from a long way away, a faint whisper. But it was real.

The Interventor stood stock still. Smiling. That single word had had an unexpected effect on her. It was as if a blindfold had been ripped off, and all those thoughts and feelings that had been locked away now flooded through her. She made a swift movement with her hands, and a mirror appeared in front of her. A little girl in a white nightdress looked back at her. She nodded. All those years of confinement had reduced her to a frightened, defenceless version of her old self. But that was all over now. This wasn’t the face of the most powerful of the Interventors, apart from her mentor. Slowly the memories flooded into her mind, and as she became aware of herself, she saw her reflection begin to change. Her short, straight blonde hair with its streak of white appeared again; her body grew to be the tall, athletic woman she’d been before. She was dressed in the white doublet of her Order, and the hooded black cape edged with gold thread that denoted her rank as Master. All the accessories started to appear, right down to the last detail, recovered from the depths of her memory: the country-style boots, the fine gold necklace, the emerald-green earrings. She looked steadily into the mirror and nodded. Yes, that was more like it.

Her eyes, blue as the sea, turned towards the highest part of the cliff. It would be the best place for taking a good look at her surroundings. She set off, her steps purposeful and her body fizzing with pure magic. Feeling her power – immense, focused, and under control. The feeling of lethargy had disappeared, and she felt wide-awake. Now she knew who she was.

Ayla Swanlake, the only surviving Interventor, the only hope there was of halting the Second Apocalypse. She reached the edge of the cliff and saw the magic hawk gliding through the sky on silent wings. She pinched the bridge of her nose.