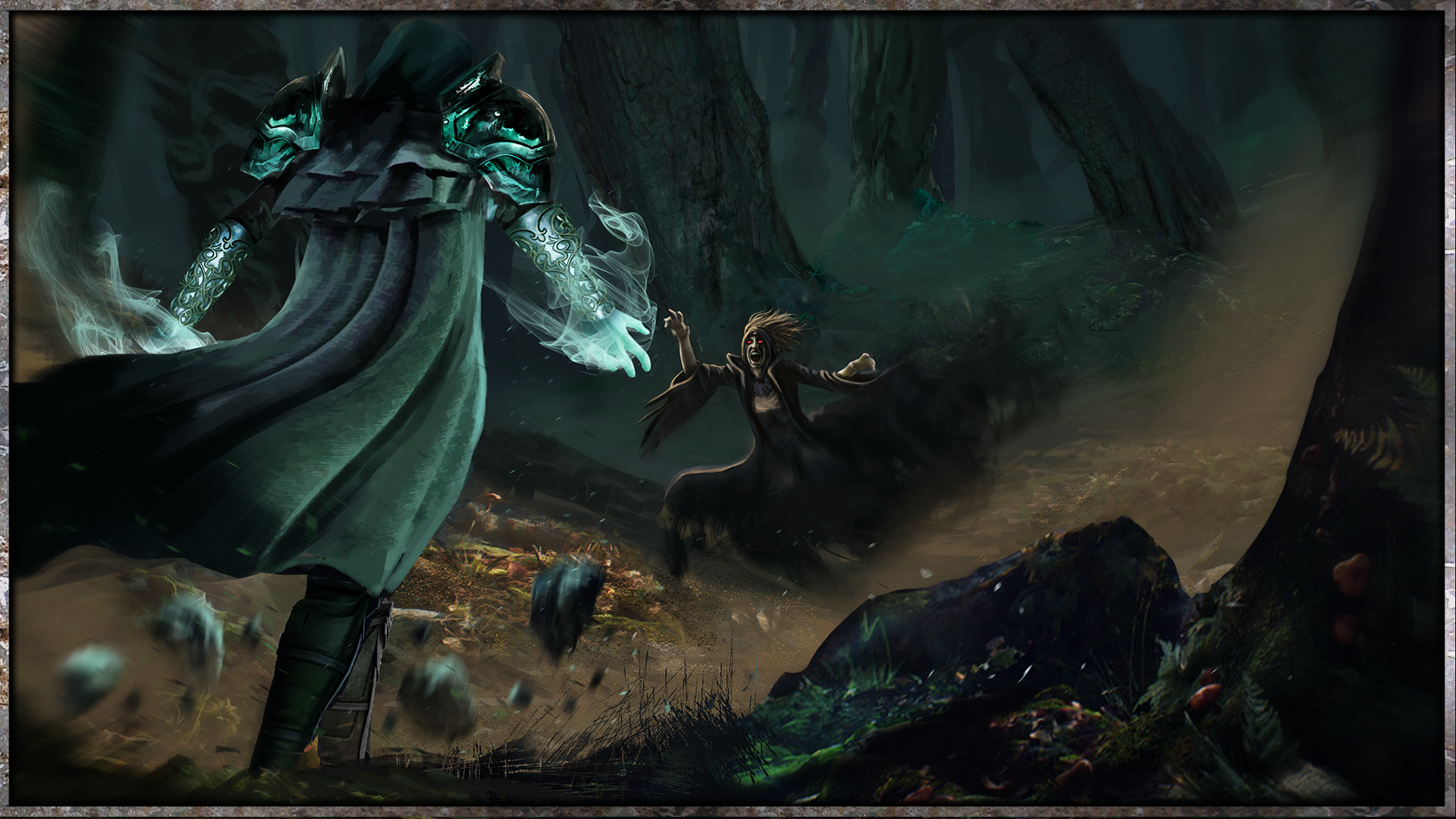 All consuming, it made her blood boil, her stomach churn, and her hands shake. It was like a knife in her gut. Ayla stomped around the log cabin, muttering to herself. How was it that the wizard had been able to see her? What was she missing? So many long hours of study, so much work, so much sacrifice. And yet she was in the dark about so many things. She was fed up with all this mystery. Sick of so much injustice. She still had work to do, the most important part of the whole mission, and there was too much that she didn’t know. So how was she supposed to achieve her goal?

“Calm yourself, child. This won’t do you any good,” whispered a voice behind her.

“We’re here for you, we haven’t forgotten you. Come on, come with us. Let’s sit down on the floor, cross our legs and get the world back under control,” said another voice.

Ayla shook her head. No, damn it. Now wasn’t the time.

“We don’t want you to suffer. You have a destiny to fulfil, one that you’ve sacrificed everything for, remember?”

“Please… Imagine you fail just because you allow your anger to get the better of you? How could you look her in the eye? Maybe you wouldn’t be able to…”

She heard a sound outside the log cabin. Turning to the window she saw the dancing shadows once again in the distance; to the north, in the gully. Letting herself be carried away, she held out her hand and the wall of the log cabin exploded in a cloud of splinters.

“Don’t do it!” pleaded the voices, unable to hide their unease. “Every decision implies losing something. And that could mean losing absolutely everything! You’ve sacrificed so much! All hope rests with you. The stakes are too high.”

Ayla started to move forward. The magic wrapped itself around her, solidifying into powerful metal plates that protected her shoulders, forearms and chest. She focused hard, willing the strands of magic to weave themselves into steel, into the shapes that she remembered, a replica of the armour that she’d once had.

“Stop!” shouted all the voices in unison; their fear was palpable.

“Deciding means choosing a path. Deciding always means losing something. But I can also decide to make sure my enemy loses far more than I do,” Ayla said as she stepped outside. Her will was as strong and inflexible as her new armour. Her magical powers had kept on growing and growing, every step she took scorched the grass around her, and her clothes shimmered and crackled. She fixed her blue gaze on the gully, pierced by the reddish rays of the eternal sunset.

“Here I am! Come to me, beasts of Mythaland! I’m going to show you my land’s first line of defence!” she yelled furiously, opening her arms wide, always pushing ahead.

Wild howls came back in reply. But Ayla kept on going. As she reached the first trees of the forest, the clearing where her refuge stood – her prison – was a good way behind her. She knew that if she lost sight of it she’d never be able to get back. But she couldn’t have cared less. She carried on walking, scorching the ground with every step she took.

Sensing a movement to her left, she turned. And then she saw it, coming at her fast, enveloped in a greasy black vapour. Her nemesis, her enemy, her victim. One of the Kehla’s guides in the Interstices, a banshee. This abomination fixed her with its red eyes, moving even faster. It uttered a wild, visceral scream that ripped through the air, making the trees tremble. But Ayla kept on going. There was no stopping her now. She opened her hands like claws, and the magic, fuelled by both the maná and the aether swirled fiercely around her.

But the banshee didn’t shy away from a fight. It hurled itself on the Interventor, using its physical and magical force in a savage attack. Ayla was thrown backwards, leaving a muddy furrow in the ground. The banshee zigzagged, disappearing in clouds of oily black vapour and then reappearing, teleporting and eventually planting itself right in front of Ayla and charging at her again, sending her flying backwards. And then it attacked twice more, until the Interventor had her back against a tree.

The banshee howled again, satisfied now, and kept on moving in its erratic way.

“You think you’re so special,” said the woman in black in a rasping voice with a hiss. “But you’ve made a big mistake. The walls of your refuge are beginning to disintegrate, and you’re no longer protected. You’re not of this world. But we are.”

Ayla spotted more movements with the tail of her eye. There were more of these horrors, but they were keeping their distance. She smiled.

“Have you lost what little sense you had left? Have you accepted your fate, bitch of Endarth? You never had any chance at all of defeating us in our own dimension. And now you’re going to learn your final lesson.”

The banshee flew at Ayla with yet another scream, a vague dark shape with sharp claws. It went for the Interventor’s throat in a final attack, but Ayla’s hands of iron grabbed its arms, stopping it in its tracks.

Then it saw Ayla’s eyes. Blue ice, lethal. It howled and shrieked, but couldn’t escape from the Interventor’s grasp. Cursing and swearing, it disappeared in a cloud of smoke, freeing itself and reappearing a few metres away.

“You said it yourself,” replied Ayla calmly. “You belong to this world. This is from where you draw your power. And at the same time, it’s where your physical body lives. It won’t be as easy for you to get away here as it is in Endarth. And that’s a death sentence, not an advantage.
She started walking towards her enemy.

“Rubbish!” said the banshee, backing away.

“We’re not in your world. You have no power here.”

“You’re wrong. I’ve been here in your world for longer than you have. I’ve felt this new energy, this aether, choking me, tearing me apart inside… and I’ve managed to tame it. It’s true that it’s taken me decades, but I’ve made it my own and now I can feel it beating inside me, dominated by my will. I do feel sorry for you, but the rules of this game have changed. Although you’re used to being the predator, today you’re the prey.”

The banshee shrieked and disappeared in a cloud of smoke again. It floated for a split second on another plane, a totally different from all known, distancing itself from the Interventor. It materialised again, knowing that it would be a good ten metres away from its enemy. A powerful fist smashed into its face, breaking its nose and splitting its lip. It howled in pain.

“There’s no escape for you,” said Ayla, shaking a fist stained with dark blood.

The banshee writhed, trying to get away. Sliding backwards at high speed, it zigzagged, jumping through a string of teleports until it was finally exhausted. And saw that it was once again facing the Interventor, who grabbed it by the throat and slammed it against a tree. The abomination screamed, spattering Ayla’s tunic with blood.

“You will not condemn my world. I will not allow it,” whispered the Interventor.

“Your world is doomed. Endarth will be ravaged by the armies of the sons of fire and death. You – aaaagh!”

Ayla squeezed the creature’s neck tightly. The banshee’s red eyes opened even wider, as blood trickled down its face. Ayla turned and moved in closer, squeezing harder. Wheezing, the banshee writhed and twisted, all claws as it lashed out in desperation. But Ayla went on staring into its eyes, ignoring the razor-sharp knives that slashed at her clothes, drew sparks from her armour and tore at her skin. She increased the pressure again, letting the magic of fire start to flow through her veins into the tips of her fingers. The banshee howled, trying its very best to escape, but then it crumpled, its reserves of aether spent. Ayla concentrated the fire and dug her fingers into the smoking flesh of the abomination. The banshee looked at her in terror, crying out with pain. But there would be no mercy. The abomination would be executed, and that was that, up close and personal. The Interventor used all her strength to break her enemy’s bones, and her magic to burn its skin. The smell of tainted blood and burnt flesh filled the air. The banshee stopped thrashing around and went limp. Its last breath was a long cry of agony, cut short when Ayla ripped its head off with a grunt.

The abomination’s body slumped to the floor. The Interventor stood there, covered in dark blood with her victim’s blazing head in her hand. With a fierce glare, she lifted it high into the air like a flaming trophy, roaring like a wild animal. Was there anybody left who could challenge her? Bring it on!

But the shadows were nowhere near.

Flinging the head away, she turned back towards her log cabin. That was when she noticed the sky. Just as red as ever, but shifting and vibrant now. The Interventor saw a likeness of the Castle of Winds shimmering in the distance, like the one in Auldor. It quickly disappeared, and another image, this time of the Oath Line of Tyrennor, hung in the air. As if in a dream, pieces of more or less symbolic buildings kept appearing and then melting back into the landscape together with others that were unknown to her. Endarth and Mythaland were filtering through into the Interstices. The veil that kept the two dimensions apart was getting thinner and thinner.

The Interventor shook her head. The moment was approaching when time would start to move forward again. And that meant that she didn’t have long left to get back to Endarth.

And then, once she was back in her own dimension, she’d be able to contact her Master. To tell her that she’d brought them all together, and that they were ready for the final battle. That said, she’d need to be extremely careful, because if she spoke to her Master, well, he’d be listening in too.

She pinched the bridge of her nose, and started walking towards her log cabin. Her wounds disappeared as soon as she put a foot on the first step of the porch. Turning towards the gully, she saw the lifeless head and body of the banshee, still smouldering.

Time was beginning to move on, but not quite managing it somehow. She still had work to do.

And nobody was going to stop her.